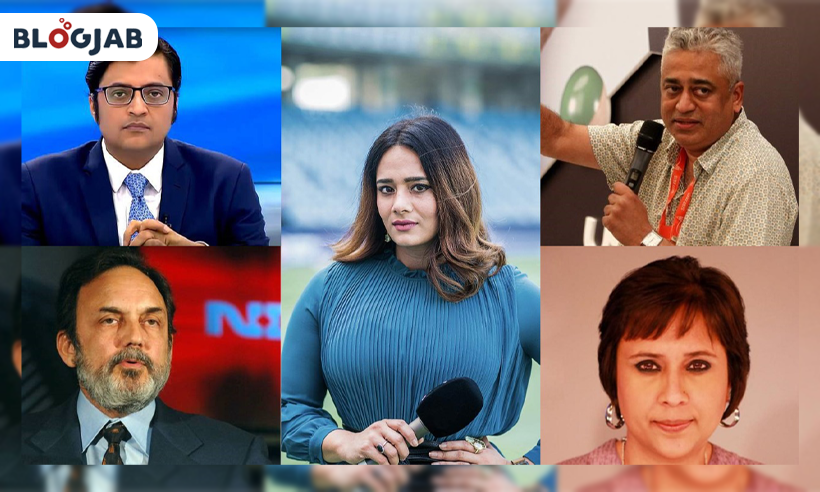 Journalism is the fourth pillar of democracy and somehow the one that brings the system and the people together. We cannot emphasize enough its importance, the more we do, the lesser it is. Although we often hear complaints about journalists being just the extended branch of political parties if we talk about the present circumstances. Journalism has become a vendetta and journalists, the spokesperson of Politicians.

Despite all the allegations and the deteriorating image of journalism in the country, some of them are working with utmost determination and honesty. They are working hard on the grounds to bring us the truth. In this article, we shall be discussing the 10 most influential and honest journalists that India has seen in the present times.

In times when the country needs to know the truth and the institutions responsible for the job are instead manipulating and diverging the focus to other subjects, there are journalists like Barkha Dutt, who have been doing their work with commitment. She visited the hospitals, the crematoriums, and the migrant workers, to bring to light their struggle for a living, suffering, and losses.

Journalism is expected to update us with news and not manipulate our opinions. Not many journalists and news channels understand this fact and are usually seen presenting opinions rather than providing news. Faye D’Souza is a renowned journalist who decided to keep her viewers updated about everything happening in the country and the world despite the lockdown. She has started a blog called “Just The News”, in which news is served to the public without any kind of manipulation or a “vendetta”.

Hashmi Taj Ibrahim is a Malayali news anchor who works for the Mathrubhumi News and has gone viral across the country for his sheer courage to drop truth bombs on the Delhi government. In his show, he asked the government how they aren’t losing their sleep over the disturbing statistics of the hospitals in Delhi. People across the nation are appreciating this courageous news reporter for having the guts to raise questions against the government and with utmost sincerity. Some even said that if all the journalists had even half the guts and courage as Hashmi Taj Ibrahim, ours would be a more successful democracy.

Swati Mishra is a news reporter who works with a leading news portal and channel, “Lallantop”. Amidst the corona pandemic, when most of us are locked in our homes and are avoiding contact as much as we can, people are struggling for food, shelter, oxygen, medicines, and beds in the hospitals. Swati Mishra went to the most underprivileged areas, hospitals, and crematoriums to help the people raise their voices and be heard. She has been working hard to reach the roots of the issues and bring them to light.

Jyoti Yadav works with “The Print” and is counted amongst the most courageous and devoted reporters of our times. Apart from bringing the suffering of people to light and the mismanagement of the system before the country, she also does major research on the availability of beds, vaccines, oxygen cylinders, and medicines and amplifies this information for the benefit of all. She also amplifies the requests of those in need. Not just her Twitter handle and the news portal she works for, but her Instagram is also a major source of information for those who seek help and those who can help them.

On one hand, some leading news channels have been crossing the bars of insensitivity, comparing election seats with oxygen availability and recklessly ignoring the huge number of deaths happening in the country due to covid and are focussing on the election, while on the other hand there are reporters like Rana Ayub, who not just criticize them but also work for the society. She recently took to her Instagram and posted about how some news channels are shamelessly reporting about elections without giving a thought about those who are dying of Covid. She wrote, “I do not lose my temper. Not on television. Last night I did. Because this insensitivity is getting to me. Last night Indian news channels were breathlessly playing exit poll results as the dead bodies were piling. I just bloody am done.”

Dwivedi works as a correspondent for NDTV, a leading news channel, and has been doing major ground surveys, bring the cries of the underprivileged before the world, and also amplifying the resources that are offering help in such a severe crisis. She recently took to her Twitter page to share the story of Kiran Vyas. She wrote that 52 yr old Kiran Vyas died in an auto while waiting on the road outside Sardar Patel Covid Care Centre in Delhi for a bed. Her son cried, “They killed my mother. I kept crying and yelling for help but none came.”

Danish Siddiqui is an award-winning and renowned photojournalist, presently working with Reuters India. He has been covering the crisis in the country and the suffering of the people with his camera and brings the most unfortunate pictures of disaster and sorrow before the world. He recently took to his Twitter page and shared the story of a covid victim. He wrote, “Documenting the deaths is a delicate task, balancing showing the human cost of the virus with preserving the dignity of the subject. In this case, Narayan’s family, who were angered by a death they saw as preventable, were adamant his story be told.”

Our country, surely, is in a state of sorrow and suffering and several aspects and factors are trying to fail us as a nation. But we must not forget that our frontline warriors are battling this pandemic and trying to protect us. There are still some journalists who are doing their job with fearlessness and sheer courage. They deserve all the appreciation for if it wasn’t for them, our country would have long been a failed democracy.

Tue May 11 , 2021
There could be no more excellent basic online business methodology. As a result, that will get more traffic to your webpage than what I am going to advise you. It has no effect that you are new to maintaining a online business or member showcasing program. In the event that […]